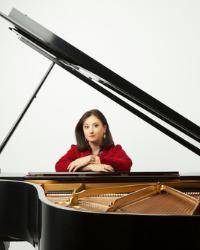 × A five-time Juno Award winner and one of the premier jazz pianists and composers of her generation.

Originally from North Vancouver, Renee Rosnes’ seventeenth album as bandleader, Beloved of the Sky (2018), draws its title and inspiration from an Emily Carr painting and creates memorable themes that contrast elegiac bleakness and soaring resilience. Rosnes’ career was launched in 1986 when legendary saxophonist Joe Henderson hired her for his quartet. She later played with Wayne Shorter, J.J. Johnson and as part of the Carnegie Hall Jazz Band. Recently, she has served as the musical director for ARTEMIS, a new all-star international band whose incredible lineup includes vocalist Cécile McLorin Salvant.

With the CapU Jazz ensembles